Food and Drink in Spanish

Spain grows a huge variety of fruit. There is fruit for every season. Learn the names + gender of fruit in Spanish:
Fruit in Spanish

.
Alfajores biscuits and Dulce de Leche are both traditional and very popular all over South America:
Alfajores Recipe

Learn and use a wide variety of adjectives in Spanish to describe food appropriate to the different meals throughout the day:
Describe Food in Spanish:  Adjectives

Watch two children making biscuits, read the recipe and instructions and make your own:
Biscuits in Spanish

Listen to this recipe in Spanish, find out about ‘anafres’, follow the visual instructions and make the recipe:
¡Frijoles Refritos!

Talk about Eating out or at Home in Spanish

Do you like eating out with friends? Is everything reserved? Is there a table? I love Central American food …  I love turrón and meriendas in Spain too ..!  Friendly comments about food in Spanish with a video + questions and answers:
Spanish Food and Drink Listening Practice

Food is compared and discussed in the first section of this grammar resource:
Comparisons in Spanish 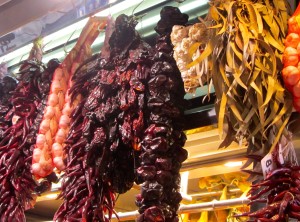