Spanish listening resources with video clips in support of learning Spanish and finding out about Spanish culture via craft ideas, recipes, video clips, stories and songs.

How to make a PIÑATA

Basic instructions in English + KS2/3 Spanish video clip + reading and translation practice using Hay que + verbs in the infinitive to explain how to make a piñata:
How to Make a very simple Piñata

Have fun with this simple Spanish RAP which the author of this site first came across in Tegucigalpa, Honduras. It has nothing in it particularly to make Spanish children laugh (and they do use it to learn their vowels), but is funny for English speakers ..!

Learn to sing a famous Mexican song: Cielito Lindo
Simple, clear recording with lyrics in Spanish to follow on the video clip, easy guitar chords, and an English translation.

– For more songs go to:  A Green Mouse Spanish Songs

Tongue Twisters in Spanish are called:  TRABALENGUAS
This one is great for practice rolling Spanish ‘R’s. Listen and join in:
El perro de san roque no tiene rabo …

Latin American Recipe:  Refried Beans – ¡Frijoles refritos!
Refried beans are eaten all over Mexico and Central America.  They are delicious and good for you.  Here is more information and the words in print:
¡Frijoles refritos!
Watch, listen, cook ..!

Introduction to Argentina + Alfajores Recipe
Look at where Argentina is in the world, and learn how to make their famous and very delicious biscuits:
ALFAJORES.  Alfajores are especially good with Dulce de Leche.
Find out more:  Recipe for Alfajores + Spanish Practice 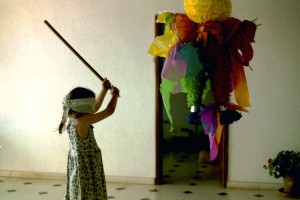