Every song has printed lyrics, an English translation, details of any actions to join in with, and a video with words onscreen to follow and sing along to:

Using the tune for El Barquito Chiquitito, join in and enjoy this story with live video of a puppy trying to escape (+ an explanation of Modal Verbs!):
Un Perrito Chiquitito

Simple recording of this famous Mexican song, frequently sung at football matches, with guitar chords and ideas of how students could make up and add verses:  Cielito Lindo

Think about the sounds in this numbers song:  0 hasta 10

Join in with this Spanish rap for children to learn how to pronounce Spanish vowels:
Spanish Vowel Rap

– Little John Dances
Lively Spanish action song for learning parts of the body
Point to each body part as you sing its name:
Juan Pequeño Baila

– I move
Spanish action song in which children move forwards, backwards and from side to side …
Yo me muevo

If a physical CD would be helpful get in touch by email via the ABOUT page. 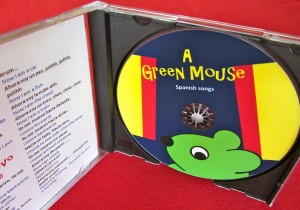